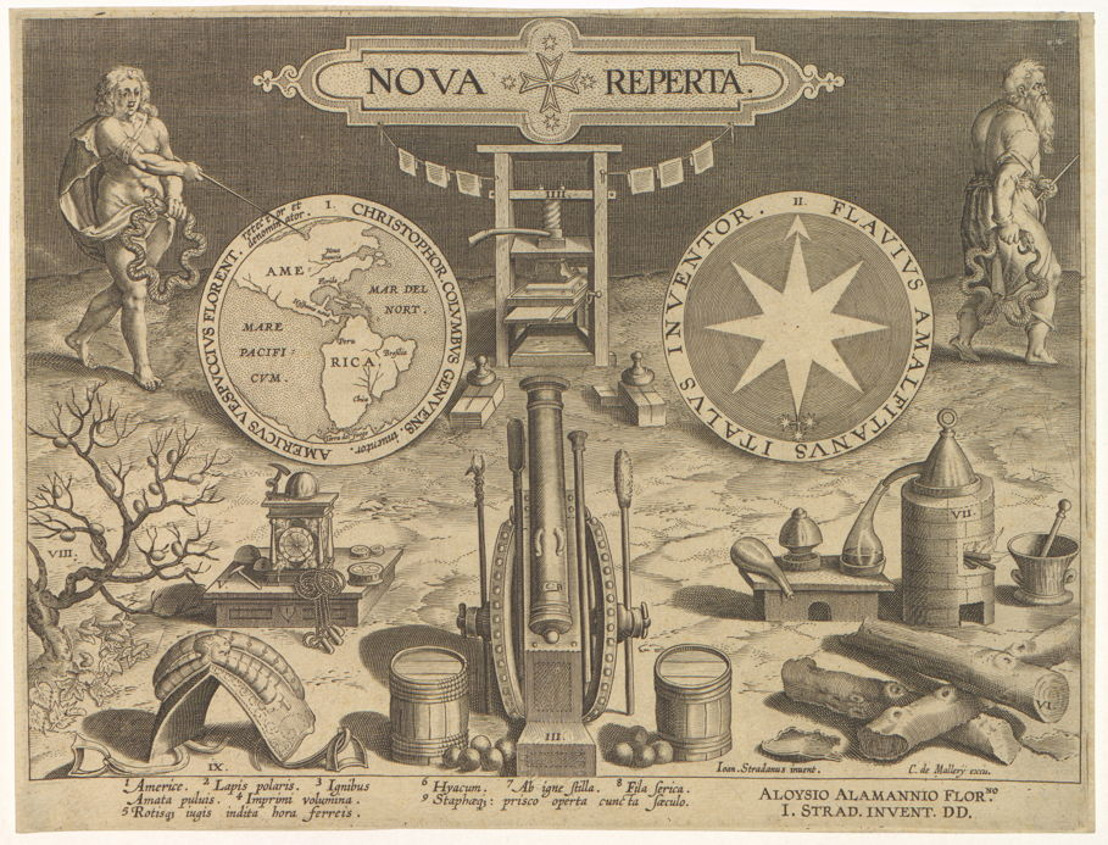 In 2020, it will be five hundred years since Christophe Plantin's birth. From 9 October onwards, the exhibition A century of wonder. Five hundred years of curiosity and innovation with the Nova Reperta series by Johannes Stradanus will look back on a century of phenomenal innovation. The prints simultaneously invite you to take a look at our own era: What images or stories would we collect in the year 2020 to illustrate innovations in knowledge or technology, in philosophy or science?

Christophe Plantin was born five hundred years ago. That other famous Christophe(r), known as Columbus, had just discovered the 'New World' only thirty years earlier. That world may have been new to the explorers, but it was ancient for the people with rich cultures who had lived there for centuries. This discovery imprints the cultural, scientific and philosophical climate of the sixteenth century. And as a contemporary of an eventful 16th century, Plantin experienced the full breadth of its significance. With the exhibition A century of wonder , the Plantin-Moretus Museum reflects on a momentous century.

"In twenty snapshots, the artist Stradanus from Bruges shares a view of the enormous political, social, economic and religious upheaval that was taking place and whose traces can still be seen to this day." - states Iris Kockelbergh, director of the Plantin-Moretus Museum.

A century of wonder

These were enthralling times. Boundaries were being pushed, both geographically and scientifically. This excitement is also evident in the series of prints created in 1590 in Florence by the Flemish artist Johannes Stradanus. With the Nova Reperta series, or 'new discoveries', he reflects on a century of innovation. He created a 'Wunderkammer' on paper, a collection of curiosities, instruments and insights with which the wealthy citizens of the time could display their knowledge and interests and in which the novelties were not only displayed but also commented on.

The images in the Nova Reperta are still highly relatable even centuries later. However, this relatability is treacherous. Behind every object or figure, there is often a hidden meaning. Iconographic analysis is required to understand what Stradanus wanted to say with his visual storytelling.

Alderwoman for Culture Nabilla Ait Daoud: "The exhibition shows that new is not always so new, but novelties are sometimes rediscoveries of centuries-old knowledge. Or as curator Geerdt Magiels so beautifully describes it: "The 'shock of the new' is often an aftershock of the old."

The bearer of that wonder?

Stradanus, working in Florence, had the prints printed by Philips Galle in the port city of Antwerp. That illustrates how the world had become much more globalised and the movement of goods and information internationalised. Some 80% of all maritime trade in the Low Countries passed through the Scheldt quays. The city was a key junction for news from around the globe and novel philosophies. This flow of information formed the breeding ground and market for Christophe Plantin, which would account for more than half of the total production of scientific work in the Low Countries in the sixteenth century.

Sense of innovation for all times

Five centuries later, the visual stories of the Flemish artist still appeal to the imagination. Not least because they invite us to contemplate our own era. Even at the start of the twenty-first century, the word 'innovation' is not just plucked from thin air. Although the planet has been traversed by man to the farthest extremities of the globe, Earth's ecological interconnectedness has only recently appeared on the radar of our consciousness.

The greatest difference with the sixteenth century is that we are now encountering the limits of the planet's growth, while at that time boundaries were being tested everywhere. The Earth's ultimate capacity seems to be coming into focus. This development puts innovation in a vastly different light. Innovation in energy, mobility, health and food supply are critical. However, the sense of innovation that drives us is the same as the one that Stradanus depicted.

Geerdt Magiels is a philosopher of science and biologist. In his work, he has always shown an abiding interest in the way history leaves its mark in contemporary and future societies. For the exhibition A century of wonder , he resolutely chooses to mirror a number of innovations from the 16th century that have helped to shape society today. In doing so, he challenges us to make unexpected links between the past and the present and to look to the future with an expectant but critical eye.

In 2020, the Plantin-Moretus Museum is celebrating the 500th anniversary of Christophe Plantin. The museum seeks to do this with a generous and varied programme that offers a surprising view of a versatile man: Christophe Plantin as an inspiration, traveller, letter writer and citizen of the turbulent 16th century. Explore the full festive programme at www.museumplantinmoretus.be/en/page/500-years-plantin.

From 9 October 2020 until 10 January 2021More information about the exhibition can be found at www.museumplantinmoretus.be/en/activity/century-wonder-knowledge-16th-century

More information for the press at https://pers.museumplantinmoretus.be/